THE FIRST LADY OF DRAG RACING: INTERVIEW WITH SHIRLEY MULDOWNEY 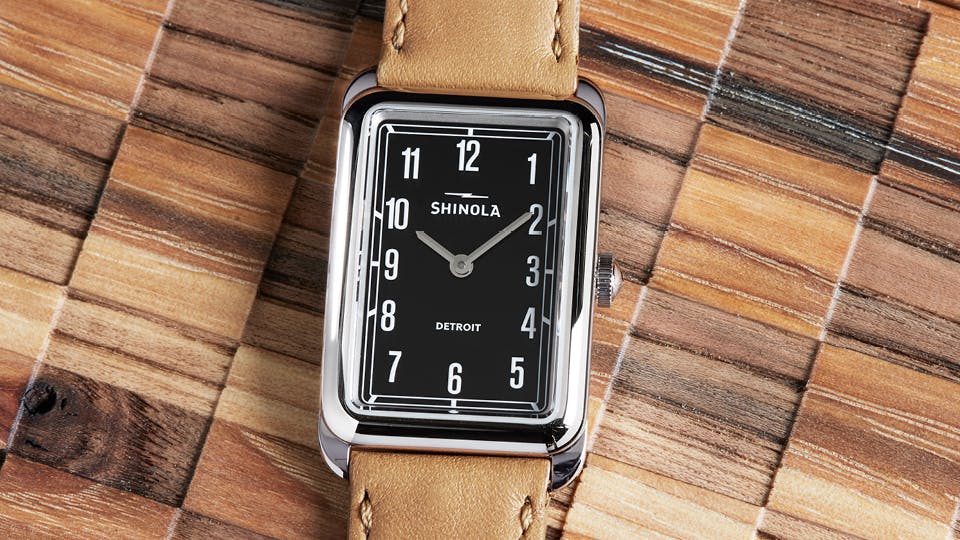 Shirley Muldowney, a living legend, was an American auto racer and the first woman to receive a license from the National Hot Rod Association to drive a Top Fuel Dragster. A hallmark of femininity in a male-dominated sport, she was known professionally as "Cha Cha" or the "First Lady of Drag Racing". Shirley’s perseverance and will to win was second to none, and her multi-decade career paved the way for many women and men after her. She remains a symbol of indomitable spirit and spunk, and is a reminder of a glamorous time when new speeds had yet to be reached.

Back in the 1970s, Drag Racing was a sport reserved for white men. Shirley discovered early on that she had a penchant for speed and competition, allowing her to break through the competition — and against the odds — with her unquestionable driving skills. She went head to head with men, and she was the first woman to win consecutive competitive titles and broke records no one had ever broken before.

How did she do it? Shirley became a notorious local street racer in her early days living in New York, but was quickly drawn to the growing form of auto competition called Drag Racing. In this type of racing, the cars used are frequently compared to rocket ships on wheels as they race in 1/4 mile increments at speeds of more than 320 miles per hour. Every second counts. 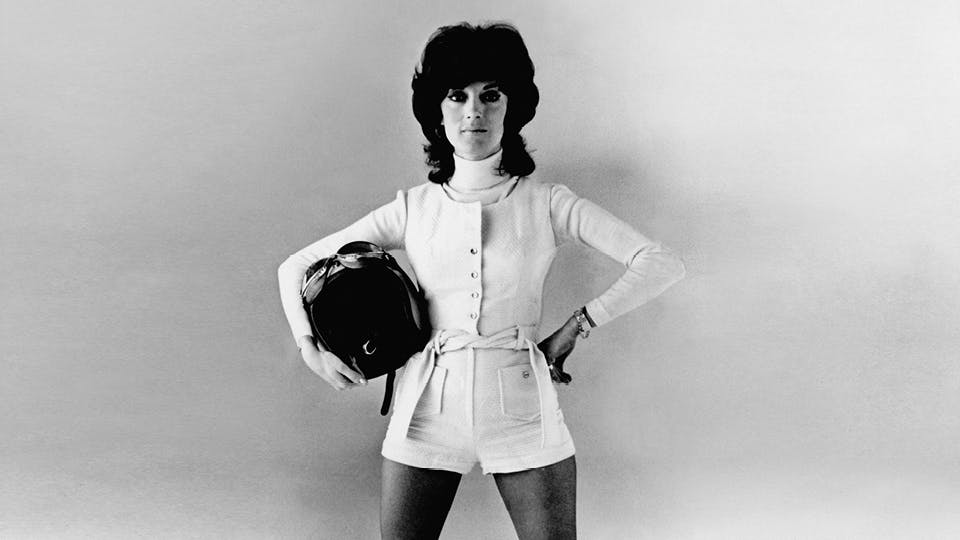 Not one to blend into the crowd, over the course of her career, Shirley became known for her unapologetic, brassy commentary on the sport along with her signature oversized sunglasses and hot pink dragster.

Shinola’s newest watch was named after Shirley Muldowney — a rebellious woman who values time and speed. This watch’s classically beautiful design embodies elegance, versatility and style with features including a rectangular tiered case, classic Arabic dial and slender strap that allows for a taller, thinner profile. This watch is for those who can hold their own against the odds. 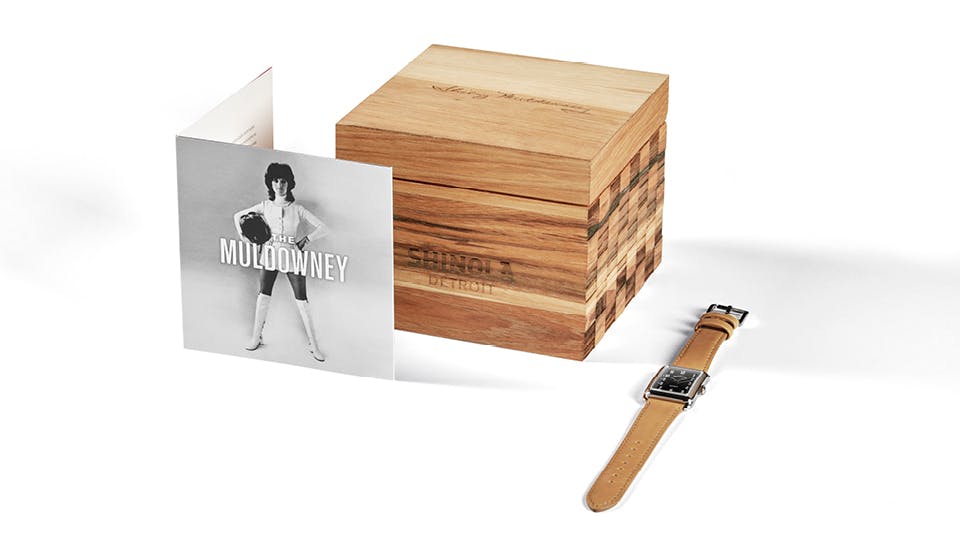 Growing up in Schenectady, NY with her parents and sister, school had no appeal to Shirley. "All I wanted was to race up and down the streets in a hot rod," she says.

When she was 16, Shirley married 19-year-old Jack Muldowney, who built her first dragster. "I was a street kid with no direction. I had no money and my family was poor. I was working at a carhop restaurant when I met Jack Muldowney. He is the one who taught me how to drive and we used to go street racing as a form of recreation. We married young," she says.

Shirley moved to Detroit when she was 31 years old. "I thought that was the hot setup thing to do," she says. "Detroit was the Motor City and I thought I was going to get all kinds of help and sponsorship, but I didn't get squat. I was a little girl from the East Coast, and initially when I moved there I felt like an outsider."

She kept Michigan as her home base until 2012, competing and making a name for herself in the midwest and east coast racing circuits. There were 12 professional races held a year, but in between those races Shirley would match race on the off weekends and that's where she made guaranteed money, she says.

"There's no such thing as practice at Drag Racing," Shirley says. "When you let that clutch out, you better be getting paid from somebody because it costs thousands of dollars to make a single run in that car."

In 1977, one of her peak racing years, Shirley became the first professional to win three national NHRA events back to back. She went onto win 18 career NHRA victories and three National Hot Rod Association World Championships all together. 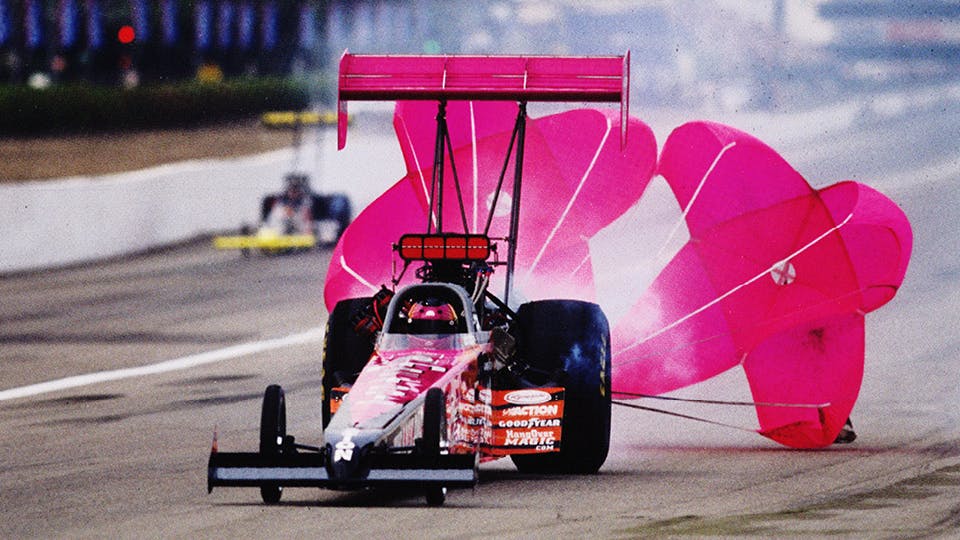 She typically worked with a team of eight to ten people to prepare her car for races. Shirley's only son, John, worked on his mom's dragsters throughout her career, but passed away unexpectedly this year.

Shirley says this family tragedy along with her past life experiences have taught her to carry on against all adversity. In 1984 during a qualifying race in Montreal, she was involved in a horrible accident that caused her car to go off the track at 250 miles per hour. The car disintegrated around her, causing a multitude of broken bones including both of her legs. Doctors didn’t believe she wouldn't ever walk again.

However, 18 months after the accident, Shirley was back in the driver’s seat and ended up being named the 1987 Comeback Driver of the Year. When asked why she kept going back to the track, even after all those crashes, her never-give-up fighting spirit unmistakablely shines through.

"Because that's what I did. That was my job. The car was my office. That's all I knew and I wanted to go back driving," she says. "I drove an additional 19 years after that with my legs all scrambled. One is shorter than the other. The pain didn't matter to me. I believe that when you find something you're passionate about, it should be almost impossible to give up."

Today, this living legend is 77 years old, part of the Automotive Hall of Fame and happily retired in North Carolina.

Summer Fashion by Ranti in Review

Summer Fashion by Ranti in Review 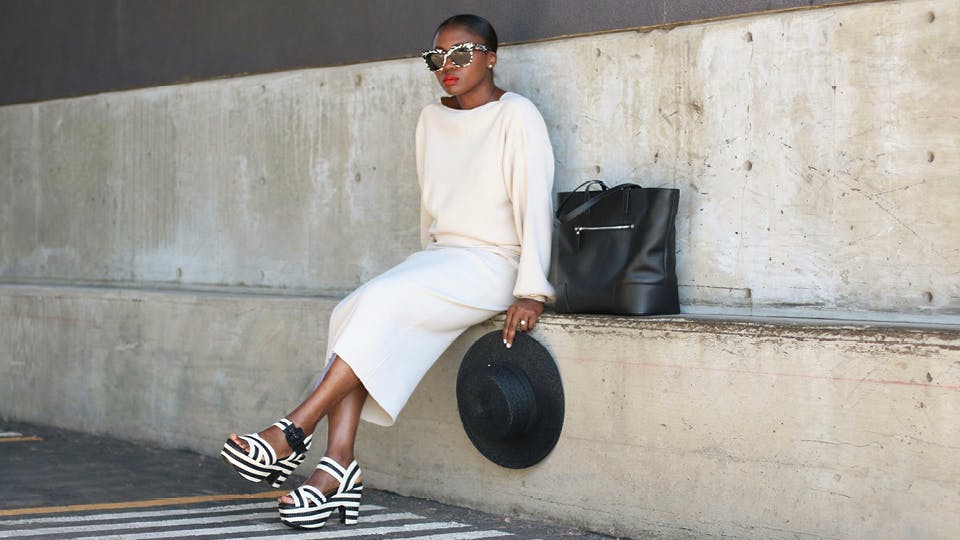